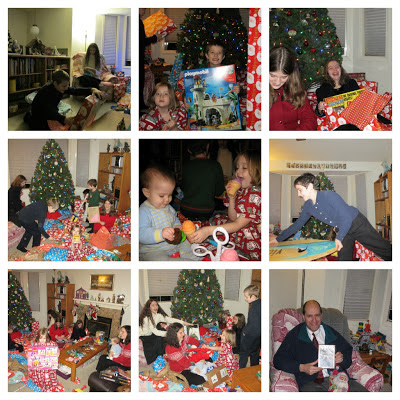 Patrick was thrilled to receive LEGO Lord of the Rings The Battle of Helm's Deep.

Needless to say, it was built in less than a day. Thankfully, he and Finnian also received some Lego bricks from their grandfather which allow for more creative building. Patrick is slightly familiar with the stories of The Lord of the Rings trilogy due to his older siblings listening to the audiobooks.

Finnian's smile, when he opened his Playmobil Fortress with Lighthouse,

made me very happy. When Finnian told us earlier in the year that he wanted the Playmobil lighthouse, I was dismayed to find that it was a 2007 set, and it was no longer being made. After work one day, my husband headed to his favorite toy store and called me to say that he had found what Finnian wanted. I am grateful that he did.

Theresa, her siblings, and her friends like the stilts that she received. She laughed hysterically when she unwrapped Rock 'Em Sock 'Em Robots

. I laughed when my husband told me that we should buy it for her, and her oldest sister laughed when she wrapped the game for Theresa. Since Rock 'Em Sock 'Em Robots was opened, the children have been enjoying playing it. Even though the quality is not what it once was, I think that my husband chose a winner. I will always remember Theresa laughing as she finished unwrapping this present.

Joan was surprised and thankful when she unwrapped her Miraculous Medal and her Gumdrop case. My parents gave her a beautiful Miraculous Medal for her Baptism, but she lost it while swimming one day. She put the new medal on immediately.

with Elizabeth. Being the eighth child and a baby, we felt that he really didn't need anything. However, we knew that Elizabeth would enjoy having him share the ice cream with her.

Anthony couldn't wait to show me how a skimboard is used. Now, we just need better weather and the beach to be open so he can show me how it is used in water. ;)

and a DUPLO Cinderella Castle

. She spends a lot of time playing with the Fisher-Price Snow White and the Seven Dwarves set that she got from her grandpa too.

as soon as she opened it. She actually received her main present, her violin, a few weeks before Christmas.

All of the children liked the Glorious Nativity Puzzle

. Putting it together was a team effort. 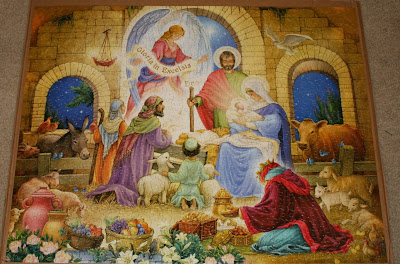 I am appreciating my new red oven mitts

. It took me a little while to decide whether or not I like them because I have been using my old oven mitts since my husband and I were first married. Not only did my husband find a great pair of oven mitts, he also purchased them in my favorite color. I think that my husband is most pleased with his UltraPod II


I am most thankful for the fact that my husband took all of us to Midnight Mass once again this past year. In my book, going to Midnight Mass is truly the best gift that he can give to me and our children. May God bless him for being such a wonderful husband and father!
Posted by Christine at 9:02 PM