Each year, we celebrate our children's Baptism anniversaries by going to Mass if possible, having a Mass offered for them (not always on their anniversary), giving our son/daughter a religious gift, and having a special dessert after dinner.

With our first child, we started by giving her a book each year; however, as our family grew, I branched out a bit. One of our children was baptized on the Feast of Our Lady of Guadalupe and another was baptized on the traditional Feast of Epiphany, so I often get a themed gift for these two children. We have also been known to get gifts that are related to the saint for whom the child is named. Below are some of the books and other presents that our children have received on their Baptism anniversaries.

CDs
CDs have actually been Christmas stocking and Easter basket stuffers over the years, but they would make good Baptism anniversary presents too. 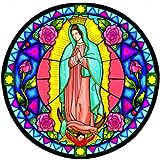 Both of these puzzles will be given this year.

Posted by Christine at 4:30 AM