I apologize for not posting saint pieces for May and for sharing June's saint pieces so late. Bernadette actually helped me update June's calendar. Life with 9 children is busy and wonderful. We are so thankful to have another baby in our house. Kilian laughed today and it was as amazing to hear him laugh as it was to hear our first child laugh. God is good!
June 2014 Saint Pieces

As usual, this month's pieces were made using the calendar published by the Priestly Fraternity of St. Peter as a guide. If we have made any errors, please don't hesitate to let me know.
Posted by Christine at 6:38 PM No comments:


A few years ago, my husband and my pastor both gave me advice that I hope I won't ever forget. I was volunteering for various organizations and, due to comments from others, thinking that I was doing great things. My husband did not feel this way. He asked me if I could please stop. He felt that our family wasn't thriving because my attention was focused elsewhere. I didn't agree with him and so he asked me to ask our pastor his thoughts when he came for dinner that night. I happily agreed, thinking that Fr. S. would have no problem with my volunteering for two very worthy organizations. Pride goeth before the fall.


Fr. S. surprised me. When I asked him whether or not it was alright for me to continue volunteering, he said, "When you die, God won't care about what organizations you have volunteered for. He will care how you have raised your children that he has entrusted to your care. And your husband (he said his name) counts for something too."


Since that time, I have tried to keep my priorities in the right place: God, my husband, my children, homeschooling, preparing meals, cleaning, gardening, etc. And I am so much happier. My husband and children seem to be happier too. They know that I love them.


We are called to lead souls to Jesus Christ and bring greater glory to God. We can't do that if our attention is focused elsewhere for large chunks of our time. May our Blessed Mother help us to always do God's will!


At the beginning of the month, I purchased some flexi-clips for my daughters and me from one of Elisa's friends. I have been thinking about buying a flexi-clip from Lilla Rose for a while; however, having not actually seen the product, I was hesitant about doing so. I am thankful that I didn't hesitate any longer.


I have finally found something to keep my hair back that looks pretty and feminine. I no longer have to untangle Kilian's little fingers from my hair when I hold him. The size medium clips are also great for loosely holding all of my hair back while I garden. I much prefer quickly slipping a flexi-clip into my hair to twisting a hair elastic

around my hair when going outside to garden for a little while.


Throughout the month of May, I have been wearing the fleur-de-lis or tidepool treasures (it's blue) clips in honor of our Blessed Mother. My daughters and I really like these pretty clips, and have been wearing them often. In fact, I like them so much that, after speaking with my husband, I decided to become a consultant.

My daughters and I are looking forward to hopefully hosting a "grand opening" Lilla Rose party in the near future. We are also curious about Lilla Rose's hair bands and flexi ohs. Bernadette has been eyeing the bobby pins, hinting that they would provide a pretty way to secure her veil at Mass. I think that she might be right.

Are you a new Lilla Rose customer? If you are ordering from Lilla Rose for the first time and you have never redeemed a "Have-1-On-Us" coupon, you are eligible to get a free item of your choice, worth up to $16, when you order 3 or more items! Simply email me the item you would like after you place your order. This offer is only good on my Lilla Rose website http://lillarose.biz/pretty (please make sure it says Christine).

If you need help with sizing, please visit this page and watch the video. If anyone reading this, has any questions about Lilla Rose hair products, hosting an online or at home party, or becoming a consultant, please leave a comment or contact me via email (prettynwrose at gmail dot com). 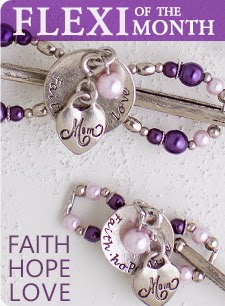 I hope that everyone had a relaxing and enjoyable Memorial Day weekend. I know that my family did. May God bless America and all those who serve!


This post contains affiliate links. Thank you to everyone who uses them. We appreciate you doing so.
Posted by Christine at 9:36 PM 8 comments:

During the weeks leading up to Finnian's First Holy Communion, he was bubbling over with excitement. On Mother's Day, he came to me and said, "Happy Mother's Day to you, Mommy, and happy quizzing day to me." Fr. S. and Fr. V. were going to be quizzing the First Commumion children that morning. Fr. S. told me later that Finnian had done a good job and I shared how excited Finnian was to receive both his First Confession and his First Holy Communion.

On Saturday, May 17, Finnian woke up early and anxiously waited to leave for the church so that he could have his soul made pure and clean like it was on the day of his Baptism. As we drove to the church, he expressed concern that he might forget some of his sins. We reassured him that as long as he didn't intentionally forget any of his sins it was okay. After he had gone to confession, he told us that he liked going and stated, "Confession isn't bad at all.". I think that he is looking forward to going again. Fr. V. gave a beautiful sermon in which he spoke about St. Paschal and his love for the Eucharist.

On Sunday, May 18, Finnian received his First Holy Communion. The Mass began with our parish's May crowning and the singing of the Salve Regina. Fr. S. gave an incredible sermon on the Eucharist that brought tears to my eyes. Shortly thereafter, Finnian went up and knelt to receive his First Holy Communion. I was thankful to see him do so. Finnian studied joyfully, prayerfully, and well to prepare for this special day. I hope that he always has a great love for Jesus in the Blessed Sacrament.

May our Blessed Mother watch over my little boy and may God bless and keep him close to
His Heart!
Posted by Christine at 8:48 AM 7 comments: