Outside my window the sky is blue and the sun is shining. It is a beautiful day!

In the kitchen, some of the children made a gingerbread train yesterday. 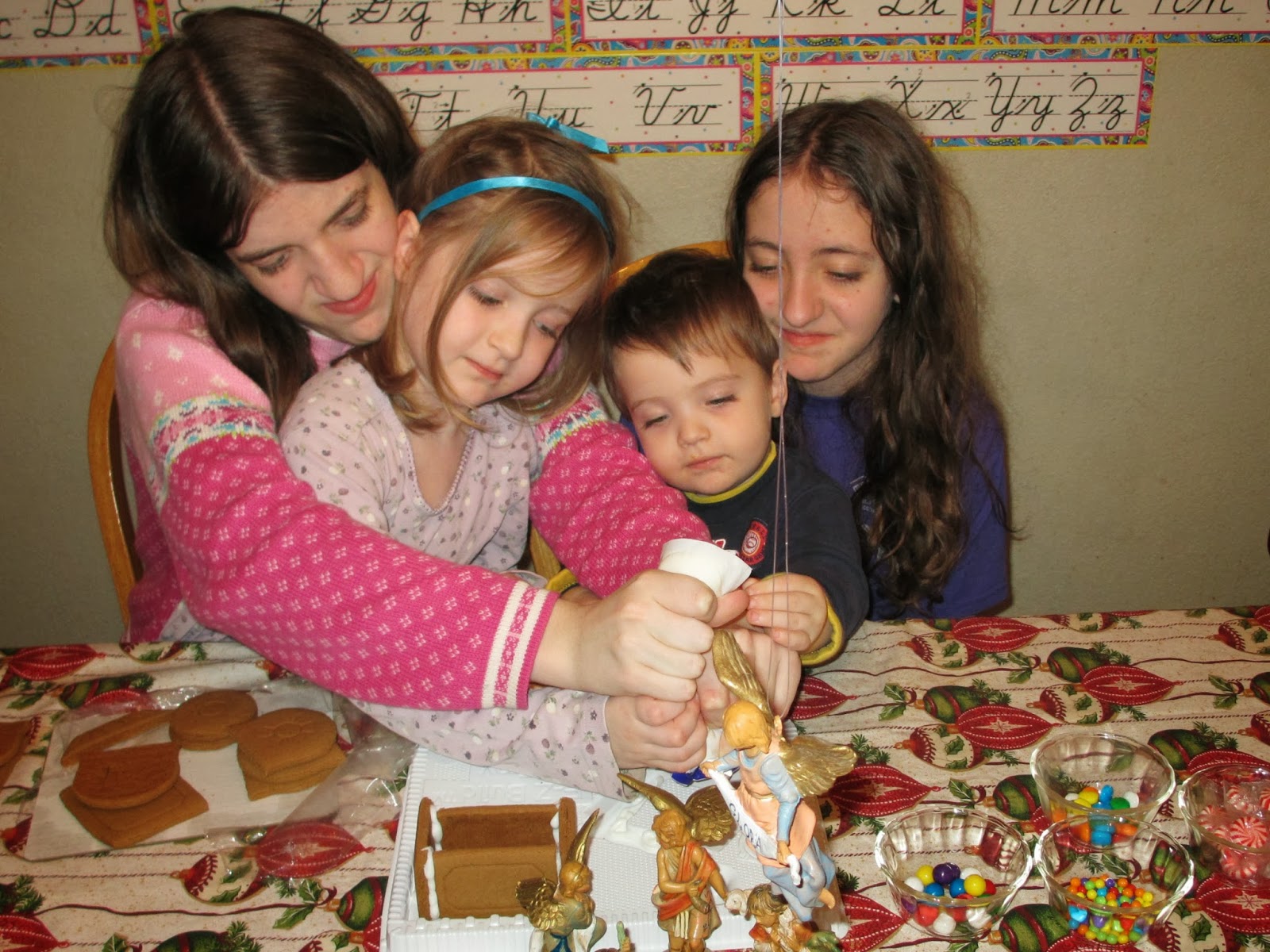 We still need to make our gingerbread houses. We were going to make them when our assistant pastor came for dinner, but we didn't have enough time after dinner was over. Then we were going to make them on one of my children's birthdays, but too many of us were sick. Hopefully, we get them made before Epiphany because that is when the children are planning on eating the houses. 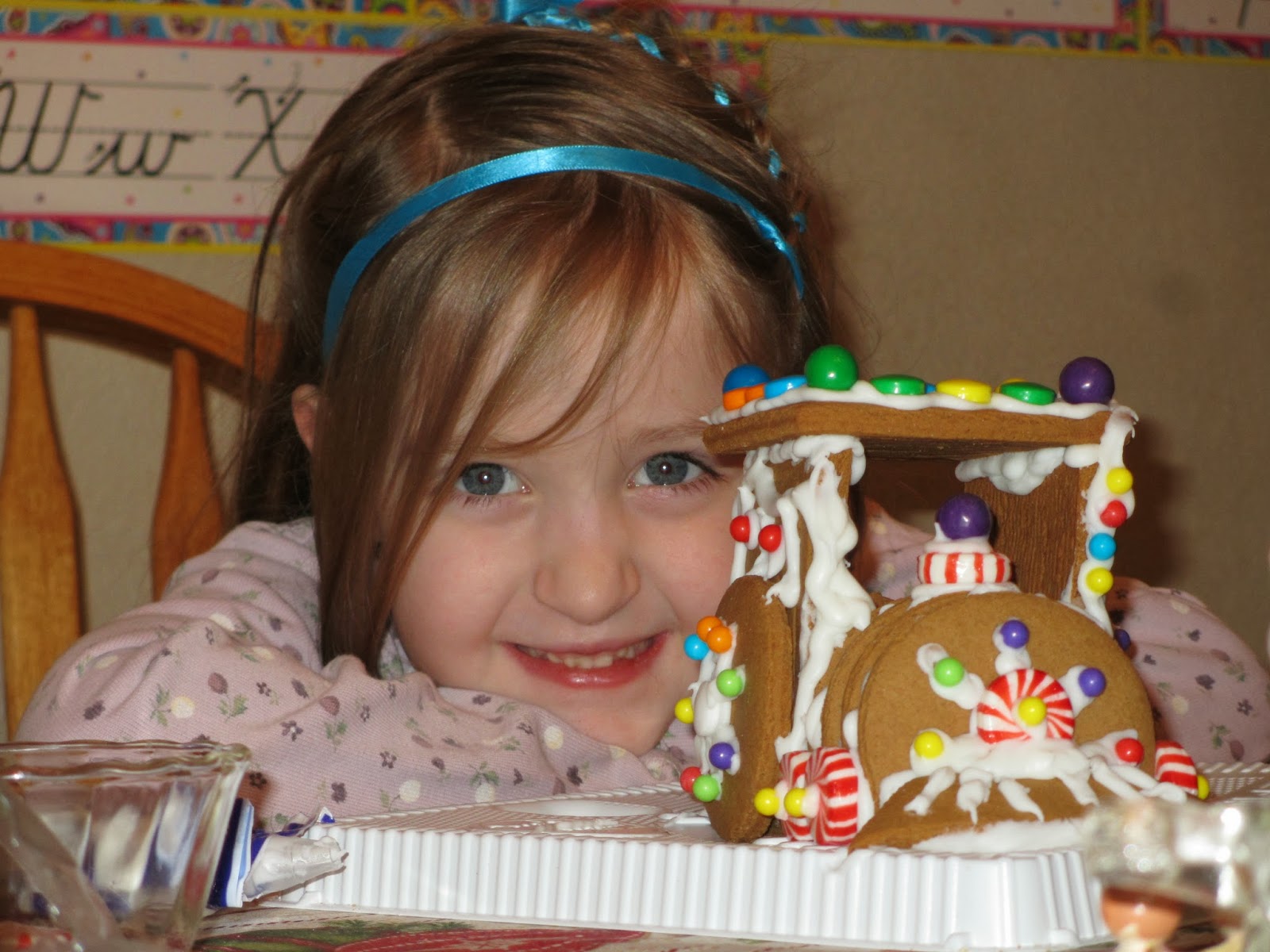 We are enjoying listening to Christmas music.

On Christmas Eve, before leaving for Midnight Mass, Patrick asked, "Daddy, do you have the Christmas CDs?" It has become a tradition in our house to wait until we are on our way to Mass to listen to Christmas music. My husband took some of our Christmas CDs a few years ago and took the best religious pieces and burned them onto a couple of CDs. He made an instrumental CD and a vocal CD. These are what we listen to on the way to and from Midnight Mass.

I am hearing Kieran say, "Thank you." He is the politest one-year-old that I have ever encountered. He has started speaking quite a lot and can often be heard saying new things. When it comes to speaking, he is a little parrot. 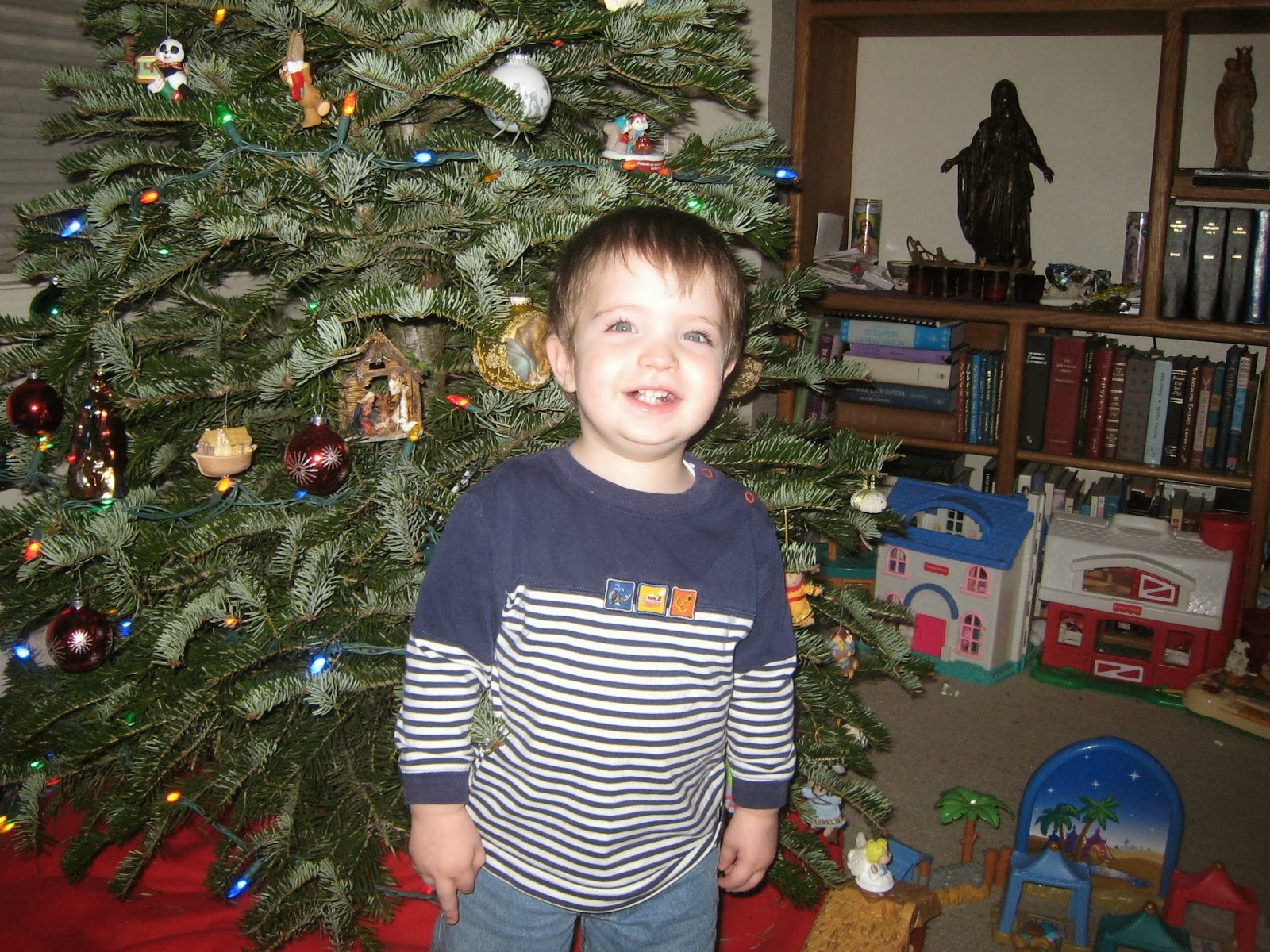 I am praying for my baby and for Patrick. Patrick scraped up his toe outside earlier this week and ended up with a staph and strep infection in his toe. He is taking antibiotics and we are watching it carefully.

I am thankful that the children all liked their Christmas presents and that they made unique thank yous to send to their grandpa for the gifts that he gave them. I think that my father-in-law will appreciate the "thank yous" that he receives. 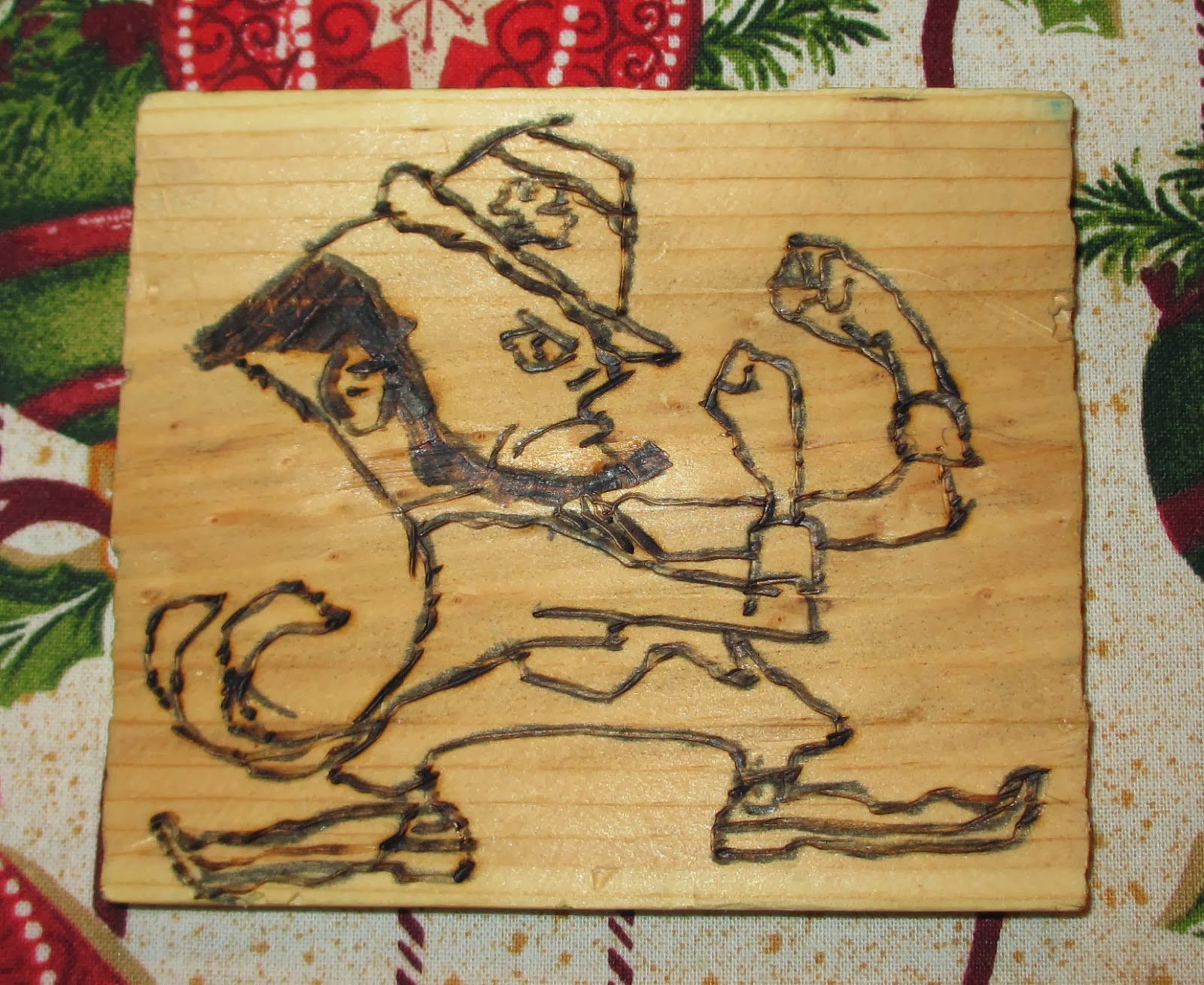 Brendan made this thank you, using the woodburning kit

that he received from his grandfather. On the back, he burned the words "Thank ye" and wrote a short letter.

I am also thankful that the children fell asleep at some point on Christmas morning. My husband and I went to bed after the children opened their presents. The children explored what they received, saying that they didn't need to sleep, but this is what I found when I woke up. 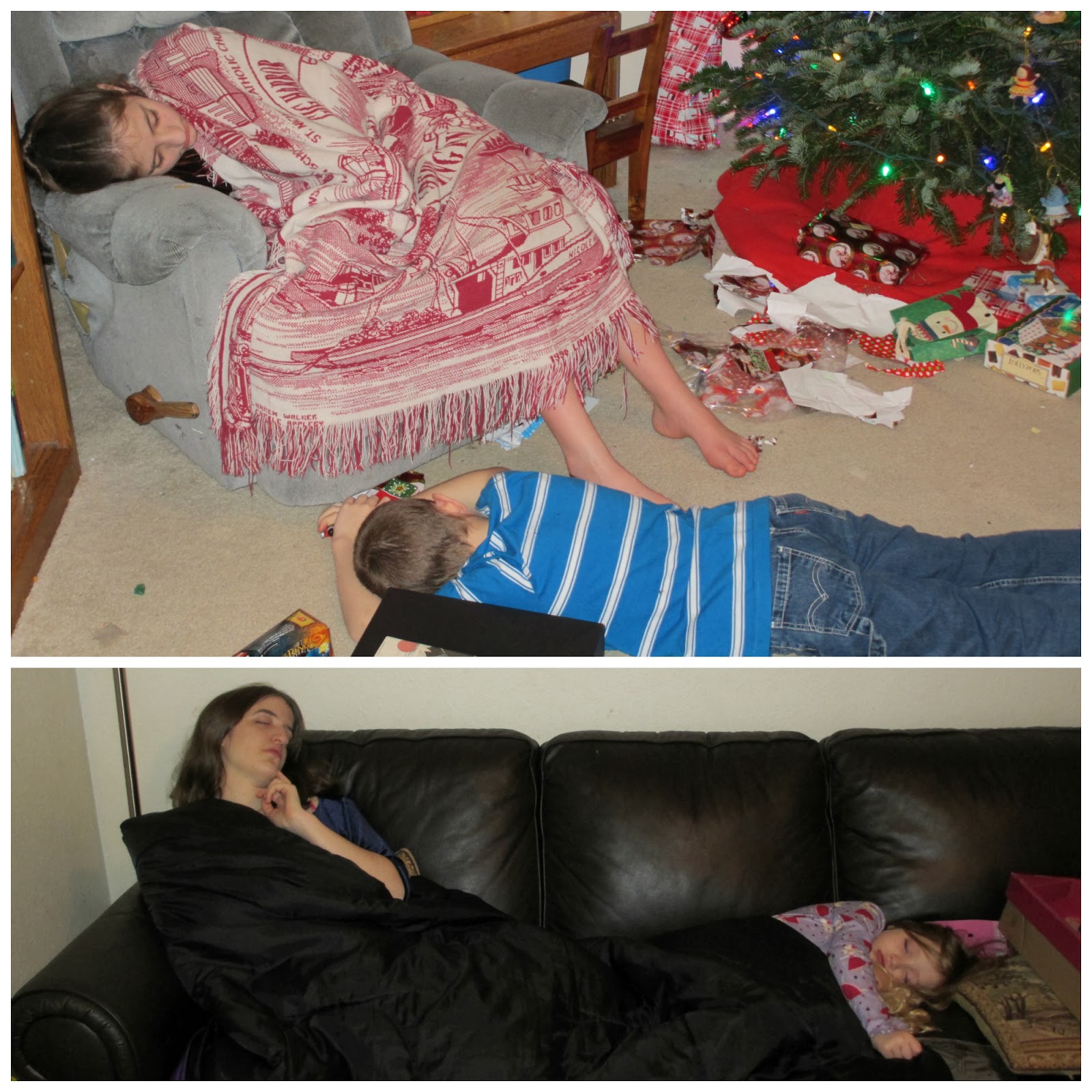 In the learning rooms, I am preparing myself mentally to start teaching the children again this coming week. I have enjoyed our break even though most of us were sick.

On Christmas Day, our wise men began their journey to Bethlehem. Elizabeth is anxiously waiting for them to arrive. I am waiting to see what she does and/or says when she places them in the stable.

I am pondering St. Bernadette's words:

"...When you realize that God permits a thing, you do not complain."
~ Saint Bernadette Soubirous,

I am reading Mother Love and Saint Bernadette Soubirous: 1844-1879.

I am happy that we are all starting to feel better and that my husband didn't get as sick as some of us did.

Plans for next week include celebrating a Baptism anniversary and birthdays. They also include starting lessons again and getting the house ready for our baby. I have a little less than seven weeks until my due date.
Posted by Christine at 12:51 PM