Yesterday's March for Life in Olympia was truly incredible! We began the March by attending Mass, concelebrated by Bishop Eusebio Elizondo and 16 priests, at St. Michael's. After Mass, we walked to the Capitol and gathered with thousands of people to witness that all life is sacred from conception until natural death. 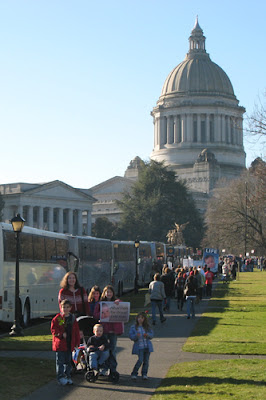 Stopping to pose for a photo on our way to the Capitol. 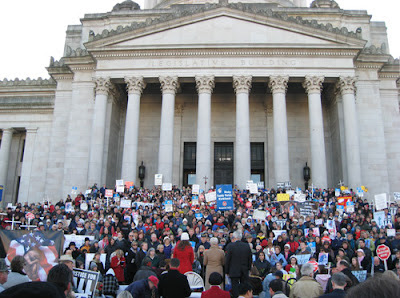 This photo is only a small representation of how many people came together for LIFE!

Video clips are available on the Gospel of Life Institute's website. Photos can now be seen on the above website.
Thank you, God, for blessing us with a sunny day! Please keep increasing the number of people in our state and the nation who support the pro-life movement, so that one day life is respected from conception to natural death by all.
Posted by Christine at 5:16 PM No comments:

Just a quick note to say that we are praying for everyone who will be attending the March for Life in D.C. and elsewhere. We will be participating in the March in "mission country", as Kathy McEntee used to call our state.

I hope to share some photos tomorrow. In the interim, photos of the 2007 March for Life in Olympia can be seen here.

May our nation come to recognize, once more, that all life is sacred from conception to natural death.
Posted by Christine at 10:02 PM No comments:

It's time for family movie night!

Our family recently learned about Faith and Family Flix, a new online DVD rental company. Faith and Family Flix was founded by the same man who started Vitae Pro-Life Credit Card Corporation. My children were excited to see that they carry some of our favorite movies, including "So Dear to My Heart" and "The Yearling". My husband and I were happy to see that they have a section for pro-life and faith videos. They carry "A Distant Thunder", "Love is a Choice: St. Gianna Molla", "Christmas in Conneticut", "The Bells of St. Mary's", "Into Great Silence", "Therese", and numerous other movies.
Faith and Family Flix also offers an affiliate program.

Posted by Christine at 10:48 PM No comments:

Email ThisBlogThis!Share to TwitterShare to FacebookShare to Pinterest
Labels: Misc.

On December 22, 2007, Brendan followed in Bernadette's footsteps and received his First Confession during Advent. We had agreed that I would go to confession first, then he would go, and then the rest of the family. I went into the confessional, knelt down, confessed my sins, and then I told our pastor that Brendan would be coming in after me.
I left the confessional, intending to let my son know that it was his turn, but he was no where to be seen. I soon learned that he had gone into the confessional on the other side, right after I had entered the confessional. He was very happy to have his sins forgiven and is looking forward to going again.
Posted by Christine at 10:09 PM No comments:

Email ThisBlogThis!Share to TwitterShare to FacebookShare to Pinterest
Labels: Sacraments

Our Birthday Boy Who is Starting to Walk

Our happy baby boy celebrated his first birthday, yesterday. He also took 10 or 11 steps (he started walking on December 30).

Double click the play button to start the video. 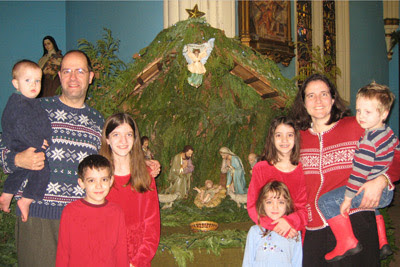