The Sisters of Bethlehem

When Catherine was one, we visited the Sisters of Bethlehem. The Mother Superior (I believe), Sr. Marider, held Catherine and whispered something in her ear. Catherine responded with a huge smile. A friend of ours snapped a photo of the whisper and the smile. When Sr. Marider was asked what she had said to Catherine, she responded, "It's a secret." 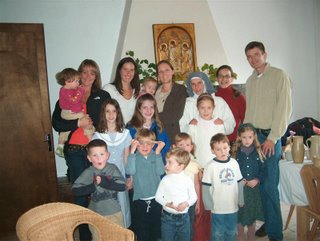 Catherine reminded Sr. Marider of her previous visit. She also told Sister that one day she would return to the monastery and become a nun. Sr. Marider told Catherine to come back in nine years and she would be waiting for her. Catherine sounded ecstatic when she spoke to me on the phone. I could not help but think, "I would like it if you became a nun, but I would prefer you to stay closer to home." Catherine may have guessed my feelings because she proceeded to tell me, "I told Karlee that I like Switzerland and the places we have visited so much that I think my family should move over here." 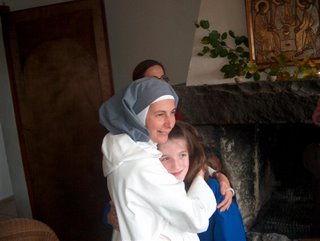 While at the voirons, my family went to the monastery store (the sisters make beautiful works of art). Sr. Marider told another nun, "I am stealing two souvenirs for two very special girls. I do not think that the Virgin Mary will mind." She gave the souvenirs to Catherine and Bernadette. While in the store, Bernadette stopped in front of something and said that she wanted to buy it as her souvenir of her trip. My dad told me that she couldn't have chosen a better souvenir. It suits her perfectly.