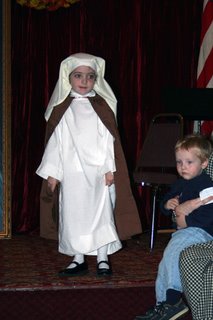 Last night, we celebrated our annual All Saints Potluck at our parish. The children look forward to it every year and plan who they want to be well in advance of the date. On the other hand, I tend to put their costumes together at the last minute, sometimes changing who they are going to be out of necessity. For instance, this year, Theresa wanted to be St. Zita. Instead, she dressed up as St. Catherine of Siena. She was quite happy to do so, but she told me that next year she wants to be St. Zita. 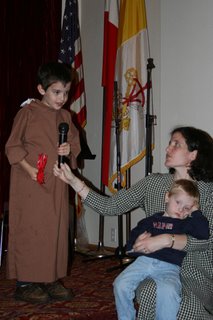 My animal lover wanted me to decide who he should be. It was quite easy. Of course, I chose St. Francis. He was quite happy to tell me what he wanted to say about St. Francis and to be surrounded by fake birds. He did confide to me that he wished they could be real animals. 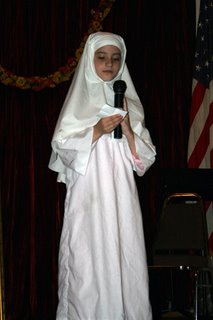 Bernadette wanted to be her patron saint and wrote some beautiful clues about her. But alas, I really did not feel up to sewing this year (all of our costumes were made by mixing and matching previous years' costumes) and so she decided to be Blessed Imelda Lambertini. I thought that this was very appropriate, as Bernadette will be making her First Communion in a few months. 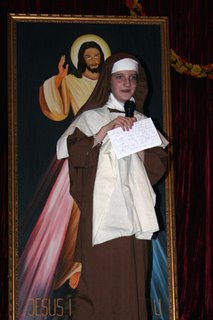 I am happy to say that Catherine dressed as St. Rosalina of Villeneuve. This is who she wanted to dress up as. In doing so, our family and friends learned about a saint who we had not been aware of previously. However, after I saw the above photo, I wondered whether I should have taken the time to make a St. Faustina costume for Catherine.
What did we do at the All Saints Potluck. We ate some delicious food. Listened to the clues that the children provided, regarding who they were. Finally, the children played organized games.
Prior to leaving, I found myself thanking God for some wonderful friends. Catherine became sick towards the end of the evening and vomitted in the carpeted stairwell. Several moms offered their assistance. One of them did not want me down on my hands and knees and so she (Barbara) got down and cleaned up my daughter's vomit. I do not mean to make anyone queasy, but I am still in awe of Barbara's giving nature. She is one of the most selfless people that I know. Dear God, please help me to be selfless and giving.
Posted by Christine at 5:58 AM