On Wednesday, January 11, Brendan, his father and I went to his Confirmation evening of recollection. The evening began with a monastic type of potluck dinner, during which all of the participants remained silent while our pastor read to us about Maria (a holy young girl who lived in Mexico). After dinner, we proceeded to the church where we spent an hour in Adoration. Adoration was followed by Benediction, Holy Mass and confirmation rehearsal. Confessions were heard during Adoration and Mass. The evening, combined with the confirmation classes taught by our pastor were a wonderful preparation for the sacrament of Confirmation. 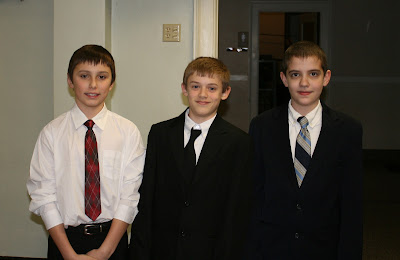 On Thursday, January 12 (my father's baptism anniversary), the Sacrament of Confirmation was conferred on Brendan and 25 other young people at our parish by Archbishop Sartain. Brendan was very excited to receive this sacrament and, thanks in large part to these two books, knew long before he did so that he wanted Saint Anthony of Padua

to be his patron saint.

His siblings were overjoyed to see him confirmed. As I sat in the pew, praying for Brendan and watching the confirmandi, Patrick whispered to me that he could not see. I told him that he could stand in the side aisle and watch from there. A few minutes later, Finnian whispered the same to me, so I picked him up and stood in the side aisle with him.  Both boys watched attentively as the confirmandi were confirmed. Eventually, they saw their big brother confirmed by the Archbishop. Having seen what they felt was important, Patrick and Finnian returned to our pew. Their knowledge of the importance of what was happening and their desire to truly see their brother receive this sacrament touched my heart. 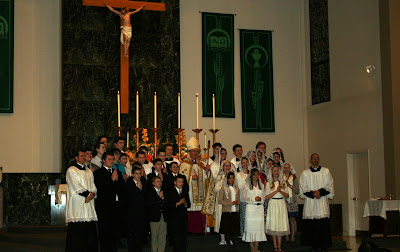 I am happy that Brendan asked to be confirmed this year. I pray that he continues to grow in the Catholic faith and becomes a great saint. 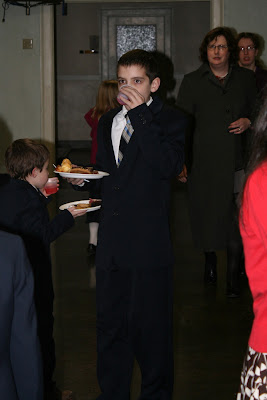 May God bless Archbishop Sartain, Fr. Saguto, Fr. Harkins and all of the confirmati!
Posted by Christine at 11:16 AM