But the men signed of the cross of Christ go gaily in the dark...

My friend, Peggy Sue, shared this with our homeschool group today.

The Ballad of the White Horse
By Dale Ahlquist

Chesterton may have considered The Ballad of the White Horse

his greatest literary accomplishment. I have two reasons for saying that. First of all, it is a masterpiece. But it was the only one of his works that he felt worthy enough to dedicate to his wife. The Ballad of the White Horse is one of the last great epic poems in the English language. It deserves a high place in literature. It should be studied in depth and discussed at length and appreciated far and wide. But as is the case with most of Chesterton’s writings, too few of us have figured this out.The Ballad is the story of the English King Alfred, who fought the Danes in the year 878. But it is also the story of Christianity battling against the destructive forces of nihilism and heathenism, which is the battle we are still fighting.
At the beginning of the poem, the Blessed Virgin appears to King Alfred, and he asks her if he is going to win the upcoming battle. Her reply is not what he expects:

The gates of heaven are lightly locked,
We do not guard our gold,
Men may uproot where worlds begin,
Or read the name of the nameless sin;
But if he fail or if he win
To no good man is told.

The men of the East may spell the stars,
And times and triumphs mark,
But the men signed of the cross of Christ
Go gaily in the dark. . .

The wise men know what wicked things
Are written on the sky,
They trim sad lamps, they touch sad strings,
Hearing the heavy purple wings,
Where the forgotten seraph kings
Still plot how God shall die. . .

But you and all the kind of Christ
Are ignorant and brave,
And you have wars you hardly win
And souls you hardly save.

Night shall be thrice night over you,
And heaven an iron cope.
Do you have joy without a cause,
Yea, faith without a hope?

The Church teaches that the two sins against hope are presumption and despair. We must not be either triumphalist or defeatist. We must not be either smug or suicidal. We do not know the outcome of the battle. We are not guaranteed victory – even if we fight for what is right. The message of this poem is that it is up to us to choose the right side, even if there is a risk that it is not the winning side. It is enough to know what we are fighting for. That is the meaning of faith and hope. That is the meaning of going “gaily in the dark.” King Alfred gets no encouraging words from Mary. And yet, strangely enough, he is encouraged. He gets naught for his comfort and naught for his desire, yet he is comforted, and emboldened in his desire to fight the foe. 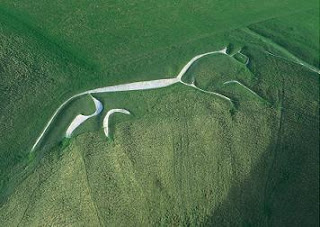 Posted by Christine at 9:20 PM