I used to sew on a regular basis, but then my favorite sewing machine got jammed and I couldn't fix it. When I learned the cost of having it fixed, I put the machine away and lamented the fact that I had used it to stitch already glued on appliques onto aprons for a friend. I learned the hard way that fabric glue and fancy sewing machines don't mix.


Anyway, for the past few years, Theresa has been wearing some of the dresses that I made for her older sisters. A few weeks ago, she was wearing a blue dress that I made and she asked me, "Why don't you sew anymore?" I replied, "I sew All Saints costumes when you children need them, but I don't like sewing on the old machine." The conversation ended until I commented that I really wanted a nursing cover. Theresa immediately said, "Why don't you make one?" I told her that a friend was making one for me and she quipped, "Well having two would be nice because then when one is in the wash, you still have another one." I knew that I couldn't win, so I temporarily put aside my book and looked online for instructions on how to make a nursing cover. I stumbled upon this well-explained tutorial. A couple of days later, I was happy to have a nursing cover. More importantly, Kieran nurses better without a blanket resting on his head. 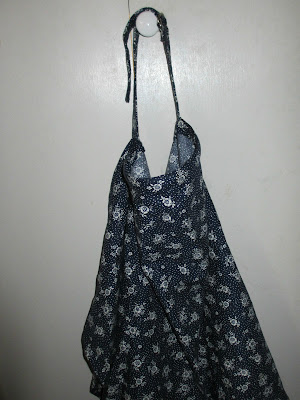 If you have a baby and want a nursing cover, please don't hesitate to let me know. I think that the sewing bug may have hit me again.

Next up, Theresa and I will be making a dress for a doll

Posted by Christine at 7:30 AM

Email ThisBlogThis!Share to TwitterShare to FacebookShare to Pinterest
Labels: Homemaking